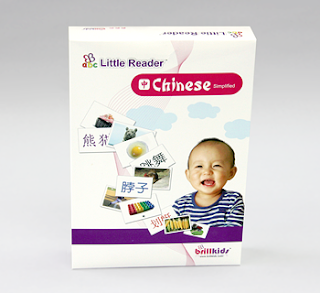 I'd always planned on teaching my children at least one other language. From what I've read, the benefits are great. It enhances academic progress in other subjects; benefits higher order, abstract and creative thinking; enriches and enhances cognitive development (especially if taught early on); enhances their sense of achievement; promotes cultural awareness and competency; improves chances of college acceptance, achievement and attainment; enhances career opportunities, etc. I always think of how supposedly, the Inuits have many different words for snow while I only have one. If you did know those words, imagine all the new shades of meaning it opens up for you.

With Jett having Down syndrome, I think it would be super cool if he could learn a new language which would open up more career opportunities down the road. If he could speak Chinese, for instance, wouldn't that be awesome? It seems to be the language to learn these days what with all the work that is funneled through the People's Republic of China. In fact, China is currently the fastest growing economy in the world and is widely regarded as potentially the biggest global market in the near future. I know many people who travel back and forth from the US to China on various business trips. Anyway, Chinese is the most widely-spoken language in the world. Plus, it's so different from English. It would really be a good work out for the brain to master it. And studies show that learning new things promotes neurogenesis!

Learning a second language early is the best way to go. The ability to hear different phonetic pronunciations is more proficient before the age of three and we lose the capacity to hear and produce certain sounds if we aren't exposed to them early on, according to François Thibaut, director of the Language Workshop for Children, in New York City.  The earlier you introduce a second language, the easier it will be to pick up its unique sounds.

So when I was given the opportunity to try and review Little Reader Chinese -- I jumped on the chance!

Little Reader Chinese has all the same great qualities of the English version including complete support of the Doman method of teaching reading to young children; multi-sensory teaching with words, pictures, videos and audio. Like the original, you can also easily add your own videos, photos and words in your own voice (if you can speak Chinese!). The year's worth of lessons progress from single characters all the way up to complete stories. 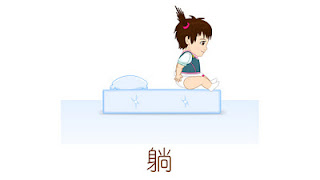 It's really cool because since I don't know Chinese, as I watch it, I get an idea of what is like for Jett to learn English. You really do have to infer and make connections in your brain in order to learn it. The screen shot at left is from a video clip showing a little baby scooting back and laying down.


As you may know, Jett is obsessed with words and reading and now letters and writing--English, that is...

I also need to add that Jett may be on the edge of the Autism spectrum... He does have some sensory issues that cause some minor aversions to sounds and occasional (gratefully waning) stimming... (As well as some borderline missing social skills, but that's for another post.)

So, when I played Little Reader Chinese for Jett, he didn't share my enthusiasm. As soon as he realized that it wasn't his beloved alphabet nor the language he was used to hearing, he cried out and made a nose dive for the floor off my lap!

Meanwhile, my 13 year old stepdaughter, Kathy was completely spell bound. She is super excited to learn Chinese and was happy to take over the abandoned session.

I will continue LRC with Jett, but I'm going to have to ease him into it. We had a similar problem with his favorite DVD, Readeez. He loves Readeez, but there is one song in the "extras" section of the DVD where the singers shout the lyrics. Jett is so freaked out by this that if we hit "extras" on any of the DVD's he screams and jumps to the floor. I obviously handled that incorrectly, so I'm going to be very careful introducing LRC. I may have to write the characters on little cards first or show him little Chinese toddlers speaking on youtube in order to prepare him for this new learning experience.

So, I do recommend the program, but Jett is not quite ready for it! (Although I do plan on acclimating him sooner than later!)

It costs $119 for twelve months of lessons, as an add on to the original Little Reader. If you do sign up to participate in the early learning discussions on their forum as well as download free flashcards and free trial lessons, you can use my affiliate code BKAFF46047. You can also join on Facebook.

Disclaimer: I was provided this product in exchange for my honest, unbiased opinion. I was not paid for this review, nor required to write a positive review.